After such a level theme went unused for many years, this level is the first level since Donkey Kong Country 2: Diddy's Kong Quest to take place inside a beehive and its surroundings.

The level starts out in the place with brown, striped trees. Small honeycombs are seen hanging on the striped tree, and honey clumps seem to hold these honeycombs on top of these trees. In front of these hanging beehives lies a huge beehive with a sticky honey that forms a waterfall. Tiny bits of honeycomb platforms are sliding through the bottom, and they seem to be stuck in a honey waterfall. Other than Snowmads, Buzzys make major appearances in this level, either as enemies or helpers of Kongs. Past through the huge beehive is the place with two hanging small honeycombs. These honeycombs seem to be longish than the ones in the entrance, and they seem to move up and down, due to the elastic nature of the honey. After they have passed the first checkpoint with Professor Chops, Kongs hang onto the small honeycomb with vines that cover around it, which causes the honey rope that holds the honeycomb to be snapped. Once the honey rope gets snapped, the small honeycomb starts to swing in a far distance; they usually take Kongs to the place where there is a vine that can be hung onto. After this swingy honeycomb, Kongs find another sets of small honeycombs - one with no honey ropes and one with the unstable honey ropes. After they have passed another huge beehive section, inhabited by a Boom Bird and a Chompasaurus, Kongs hop onto the Barrel Cannon that launches them to the next beehive section.

In the next beehive section, a group of friendly Buzzys are seen carrying a clump of green grass that Kongs can hung onto. However, when cling onto the clump of grass that Buzzy is carrying, the weight will cause it to slowly descend. Along whe way, spiked berries are seen stuck in the honey, which must be dodged by hand slapping the clump of grass. By hand slapping the clump of grass, Buzzy holding it will slightly go up, and comes down moments after being hand slapped. After passing these sections with friendly Buzzys, Kongs head to the place where the third checkpoint is situated. Yet again Kongs encounter another sets of small honeycombs that swings back and forth, and again there is another small honeycomb with the unstable honey ropes. This time, Kongs' weight snaps not only the left side of the honey rope, but also the honey ropes on top of the tree, causing the entire honeycomb to be catapulted to the other side. The honeycomb will then bounce off the pointy rock with spiked berries before sticking onto the honey waterfall. Once this section is passed, a Slot Machine Barrel can be seen on top of the vine, ending the level. 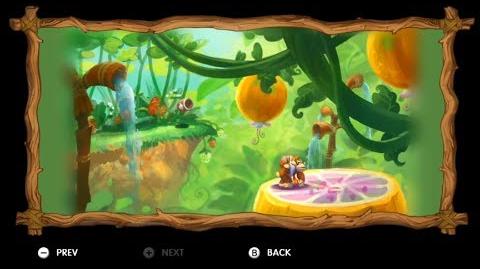