"What a cracking noise! It was good to hear her again!"
—Bazooka

Bazooka is a member of the Brothers Bear from the game Donkey Kong Country 3: Dixie Kong's Double Trouble!. Bazooka is an old war veteran and was a brigadier of the Kremean War some time ago, and now still lives in Bazooka's Barracks stationed in the fourth world, Mekanos.

Bazooka is upset because his old war cannon, which he calls Big Bessie, cannot fire due to the lack of ammo during the events of Donkey Kong Country 3. However, if Dixie and Kiddy Kong give him the Bowling Ball, which can be received by Blue when giving him the gift from Blizzard, it will suffice as ammo and can be used to blast to a secret Banana Bird Cave called Sky High Secret.

Bazooka is pleased when hearing Bessie fire again, and will ask the Kongs if they want to go again after revisiting him. Afterwards, the cannon can be fired anytime to reach Sky High Secret. 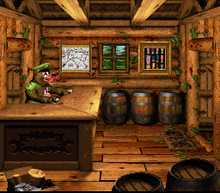 Bazooka's sprite in the SNES version