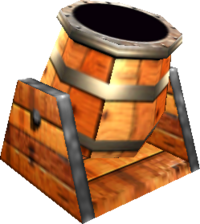 A Barrel Cannon (called Barrel Kannon in Donkey Kong Country 2: Diddy's Kong Quest) is a type of cannon in the Donkey Kong series. All Barrel Cannons share the basic function of shooting characters out of it. To use it, a player must simply get in the Barrel. The Barrel will then shoot them automatically or launch them when the player presses a certain button.

In Donkey Kong 64, the only way a player could use these cannons is by getting on a special platform with Donkey Kong's face on it with Donkey Kong, pressing the Z button, and Donkey Kong will be launched into the air. He will hit a Barrel Cannon in midair and the player must aim correctly to hit the other cannons in order to complete this trial. If a player launches too far from any Barrel, they will restart the stage.

Autofire Barrels (also known as Blast Barrels) are signature features of the DK series. Autofire Barrels first appeared in the original Donkey Kong Country. Their main purpose was to blast the Kongs through stages, in a predetermined angle, in order to advance. Autofire Barrels, as the name suggests, fire almost immediately upon landing inside. They are often key in stages, and players often see it as a safe way to go through the stage. In fact, there were various hidden shortcuts, particularly in Donkey Kong Country, that required the use of these.

Other appearances include a small segment in Super Smash Bros. Brawl's Subspace Emissary, and recently in a trailer for Donkey Kong Country Returns.

These Barrels are ignited at the signal of the user. Ignite by pressing the A Button. They may be stationary or move around in a preset pattern. These are one of the most common types, and may provide challenges or relief when using them in areas with hordes of baddies.

These Barrels launch you in the direction of the arrow. They can be controlled by pressing left or right on the + Control Pad. Beware: each one has a set time of ignition, and may launch the user away from intended target if not used properly.

In the Super Smash Bros. series

The Barrel Cannon appears as an obstacle in Super Smash Bros. in the Kongo Jungle stage (incorrectly spelled Congo Jungle). It would move back a forth beneath the stage and sometimes rotates as well. If a player fell into the cannon, they could press the A button to fire themselves out of the cannon in the direction of the arrow on the cannon. After a time is reached, they will be fired automatically. Only one person can use the Barrel at a time.

In Super Smash Bros. Melee, it appeared as an item as well. The item can be rolled around the stage. The first person who makes contact with it will be stuck in it. The Barrel Cannon then operates like its stage element. It also appears in Kongo Jungle. Also, a collectible trophy of it appears in the game.

The Barrel Cannon does not specifically appear in Super Smash Bros. Brawl, but a differently designed item does appear in the Adventure Mode of the game. It functions like the Barrel Cannon.

The Barrel Cannons were used in Donkey Kong games as a vital means of transportation, and their explosive nature is used similarly in Super Smash Bros. Melee. On the Kongo Jungle stage, one can catch characters as they fall from the main platform. Careful! The Barrel Cannon rotation may accidentally send you flying off the screen.

In the Mario Kart series

A bigger version of the cannon appears in DK Mountain. Getting in it will fire the player at high speeds until they reach land, at which they will slow down and land.

Donkey Kong Country (SNES)
"Barrel Cannons are usually suspended in the sky by some unknown force. Once you jump into one you can launch out of it, high in the sky or across great distances. There are two kinds: regular cannons which you press the B button to activate, and automatic cannons which will launch as soon as you jump in. Automatic Barrels are marked with a white explosion."

Donkey Kong Country (GBA)
"Leap into a Barrel Cannon to get launched into the air. Those marked with an explosion symbol will fire automatically, while others will require a press of the A Button to launch. You'll also find some Barrel Cannons that move, so be sure to time your shots carefully."

Donkey Kong Country 2: Diddy's Kong Quest (GBA)
"There are several types of Barrel Kannon. Arrow Barrels simply launch you in the direction of the arrow (use the + Control Pad to move left or right in the air). Blast Barrels will automatically launch you in a certain pre-programmed direction. Delayed Blast Barrels will allow you to aim them before they blast you out."