"Yes, I used to be a scuba diver but I've given it up. I just take it easy here at home now." Barnacle

Barnacle is one of the Brothers Bear in Donkey Kong Country 3: Dixie Kong's Double Trouble!. He lives on Barnacle's Island in the middle of Lake Orangatanga. He is the second of the Brothers Bear that can be reached in the game. However, in the Game Boy Advance version, his cabin was replaced with Bachelor's Bachelor Pad and Barnacle's Island was relocated to Pacifica.

Barnacle is the oldest member of the Brothers Bear, judging by his white mustache, beard and bushy eyebrows. He wears a white wool sweater and a black pants, and has a small blue hat, stereotypical for sailors.

Barnacle mentions that he is a former scuba diver, but just wants to take it easy at home. He is very proud of his shell collection, which is visible in his cabin. He has a Banana Bird, which he keeps in a bird cage in is cabin. He explains that "He just flew in once, so I decided to keep him".

The player must purchase a rare Shell from Bazaar for 5 Bear Coins, and give it to Barnacle in exchange for the Banana Bird. Prior to the exchange, Barnacle occasionally says "You know, I don't think there's anything which would persuade me to get rid of this bird". After the exchange, he continues to talk about missing the banana bird, and how his shell collection cheers him up.

In the Game Boy Advance version, Barnacle sports a navy blue attire with a matching large hat. He lives on Barnacle's Island, now relocated to Pacifica. His residence is in a shipwreck. 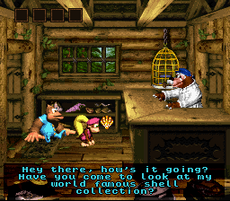 his appearance in Donkey Konga

Barnacle's sprite in the SNES version