Banjo Bottom appears in the boss level The Mole Train of the Cave. When Donkey and Diddy Kong arrive, they see many Mole Miners filling mine carts with bananas. The tiki spots the Kongs. The heroes then spot Banjo Bottom, who signals for the Mole Miners to jump into the mine carts. After the boss Mole Miner Max is hypnotized and possessed by Banjo Bottom, the steam train starts up. A single Mole Miner will throw pickaxes at the Kongs. The isolated mine cart that the primates are riding on gradually will get closer to the other ones. After the mine cart connects with the other ones, Mole Miners will pop out of the mine carts, and then the heroes have to jump on and defeat them in order to continue. All mine carts will randomly miscarriage, except for one. This process will repeat for other two phases, getting harder every time. Following this, the fight with Mole Miner Max goes underway. He will dive into the mine carts attached to the train, pop out and throw pickaxes at the Kongs. The boss will be more vicious and random than regular Mole Miners. After the heroes jumping on his head and hitting him four times, Mole Miner Max will be defeated for good. The train will be damaged and suddenly stop before the edge of the tracks. A dazed Banjo Bottom will come out of the boss. The player can choose to jump towards the tiki, punch it multiple times, throwing it away, or wait a few seconds for Banjo Bottom to leave.

Banjo Bottom has one big eye and one small eye, with red eyelids. Between its strings are four arrows pointing downwards. It also has the same arrows point all around it into the head of its banjo shape. It also has a blue tailpiece. Something that is noticeable as well is the tiki's yellow leaves for hair, and its blue eyebrows. It has three digits for hands, and also appears to have a red/brown back. 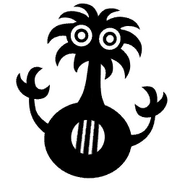 Banjo Bottom's silhouette always seen at the screen when the Kongs are defeated in any levels of the Cave world in both games.