During gameplay, the Banana Bird Queen was sealed away by Baron K. Roolenstein. The Banana Birds, her children, were the only ones who could free her. However, they were also kidnapped and have been relocated all across Northern Kremisphere, being kept away in caves, with the Brothers Bears, and with the Kong allies.

To release the Banana Bird Queen, Dixie and Kiddy Kong must collect all of the Banana Birds and take them to the Queen, where they will break the barrier by singing a song together. Once the Queen is released, she chases Baron K. Roolenstein, ultimately leading to his defeat. 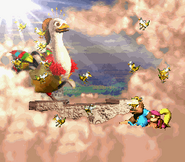 Dixie and Kiddy Kong releasing the Banana Bird Queen.
Add a photo to this gallery
Retrieved from "https://donkeykong.fandom.com/wiki/Banana_Bird_Queen?oldid=69733"
Community content is available under CC-BY-SA unless otherwise noted.