Arich (Japanese: アーリック Ārikku) is the second boss in Donkey Kong Country 3: Dixie Kong's Double Trouble!, and the third in Donkey Kong Land III. It is a giant red-colored tarantula that hangs by a web, capable of spitting green balls of venom.

In Donkey Kong Country 3: Dixie Kong's Double Trouble!, he is fought at the end of Kremwood Forest, in the level Arich's Ambush. He drops down from the screen and starts spitting green venom balls. His main attack pattern is bouncing from his web and spitting the venom, which ricochet and various angles. Kiddy or Dixie must attack him by throwing barrels at his face. After taking damage, Arich spits green balls at the two. After four hits, he is defeated. In the final blow, Arich blasts up, flips over, and becomes unconscious.

Arich made another appearance in Donkey Kong Land III as the boss of the third area, Blackforest Plateau. His level name is slightly changed, though, to Arich Attack. Arich is notably smaller, due to limitations. Despite that, the battle is similar to Donkey Kong Country 3: Dixie Kong's Double Trouble!'s, because of the barrel usage. First, Arich releases three balls of venom. The Kongs must jump on his head, causing him to bounce around at a much faster rate to try and crush them. It takes four hits for him to be defeated. 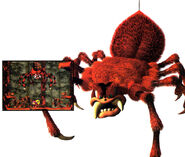 Artwork with Kiddy and Dixie Kong.