Angry Aztec is the second world in Donkey Kong 64.

This world has an Aztec-like motif, including some Egyptian too. It features numerous pools of scorching quicksand and large temples. This level has Tiny Kong and Lanky Kong trapped in separate temples. This level also introduces Candy Kong's Music Store. Here, Donkey Kong gets the chance to free a Llama from a cage. Dogadon, Angry Aztec's boss, is fought and defeated by Diddy.

In the center of one of the world's areas, there is a large totem with a spinning face. It might be a reference to either Inka Dinka Doo from the cartoon series or juju the totem pole from Banjo-Kazooie. The latter being because Diddy has to fire peanuts into his mouth.

Inside an underground passageway.

The interior of Tiny's temple.

The main room inside the llama's temple.

Inside a room of the "Five Door Temple". 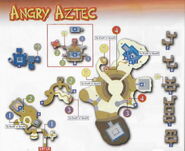 Map of Angry Aztec
Add a photo to this gallery

Retrieved from "https://donkeykong.fandom.com/wiki/Angry_Aztec?oldid=59099"
Community content is available under CC-BY-SA unless otherwise noted.