Amiss Abyss is the third stage in Sea Breeze Cove from Donkey Kong Country: Tropical Freeze. It is preceded by High Tide Ride and followed by Irate Eight. It's also the game's second silhouette stage.

Not only is this the game's second silhouette stage, it is also the only one in the game (and so far, the series) that takes place underwater.

The level begins in a cave, though the visuals appear the same as usual. From there, the Kongs can dive into the water below, where the level begins to shift to its silhouetted visual style. While underwater, if the Kongs perform a Corkscrew into a school of fish, they will scatter and emit light for a short period of time, causing nearby sea anemones to retract themselves. As the Kongs swim through the level, they must use the Corkscrew to break through wooden barriers while avoiding jellyfish. They will then reach what appears to be a dead end; however, if the Kongs scatter the nearby school of bioluminescent fish, it will awaken a giant catfish in the background that breaks down the wall to the right, opening a way through.

In the next area, the Kongs will encounter multiple Pufftups en route to the first checkpoint. The Kongs will then emerge from the water into a small shelter, where a DD Barrel and two Tucks can be found. After making their way through, the Kongs will leap off a trampoline back into the water. Jellyfish and anemones are now more abundant, including multiple jellyfish that swim in a circular formation around a wall of spikes. Eventually, the Kongs will come across an object resembling a signpost. If they perform a Corkscrew on it in the direction the arrow is pointing, a statue in the background will glow, activating a gate for them to pass through. After following several bioluminescent jellyfish past the gate, the Kongs will find two more gates and eventually a Barrel Cannon that blasts them out of the water and into a cave.

While in the cave, the Kongs must avoid several more spike hazards while making their way down a path leading back into the water, where they will find two large, wheel-like structures covered in anemones, with schools of bioluminescent fish swimming around them. In order to swim around them safely, the Kongs must swim alongside the fish as the anemones retract in their path. On the other side, the Kongs will find their path blocked by more anemones; however, by activating the nearby signpost-like object, the ceiling and floor holding the anemones will part, forming a path for the Kongs, though they will begin to slowly close together again soon after. While making their way through, the Kongs must Corkscrew through more signposts found along the way to keep the ceiling and floor apart and avoid getting crushed, while also avoiding getting hit by Pufftups. After passing between the anemones, the Kongs will find the Slot Machine Barrel surrounded by a ring of jellyfish. 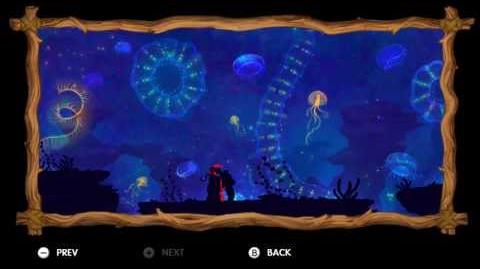